The analog optical transceiver adopts the PFM modulation technology to transmit the image signal in real time. The transmitter first performs PFM modulation on the analog video signal, and then performs electrical-to-optical conversion. After the optical signal is transmitted to the receiver, performs optical-to-electrical conversion, and then performs PFM demodulation to restore the video signal. Due to the use of PFM modulation technology, the transmission distance can reach 50Km or more. Through the use of wavelength division multiplexing technology, the bidirectional transmission of image and data signals can also be realized on one optical fiber to meet the actual needs of monitoring projects. This analog optical transceiver also has some disadvantages:

a) Production debugging is difficult;

c) The anti-interference ability is poor, which is greatly affected by environmental factors and has temperature drift;

d) Since the analog modulation and demodulation technology is used, its stability is not high enough. With the increase of use time or the change of environmental characteristics, the performance of the optical transceiver will also change, which brings some inconvenience to the project.

b) Support video lossless regeneration relay, so multi-level transmission mode can be used;

c) Less interference from the environment and high transmission quality; 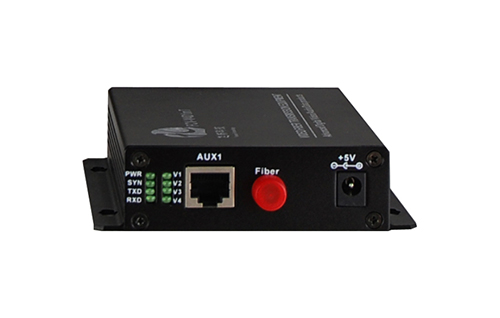