PDH vs SDH: Understanding the differences and similarities

Plesiorhythmical Division Multiplexing (PDH) and Synchronous Digital Hierarchy (SDH) are two commonly used technologies for multiplexing and transporting digital signals in telecommunications networks. Both PDH and SDH have their own set of advantages and disadvantages and are used in different scenarios depending on the specific needs of the network. In this article, we’ll take a closer look at PDH and SDH and compare their differences and similarities to help you understand which technology might be the best fit for your network.

PDH, also known as Plesiochronous Digital Hierarchy, is a technology that has been in use for several decades. It is based on a plesiochronous clock, which means that the clock rate of different equipment in the network can be slightly different. This allows for simpler and less expensive equipment to be used, but also means that there is a limit on the number of channels that can be multiplexed together. PDH systems use a technique called bit interleaving to multiplex several lower-speed channels into a single higher-speed channel. PDH standards define several levels of multiplexing, such as 2 Mbps (E1), 8 Mbps (E3) and 34 Mbps (E4).

SDH, on the other hand, is a newer technology that was developed to address some of the limitations of PDH. SDH is based on a synchronous clock, which means that all equipment in the network is locked to the same clock. This allows for more channels to be multiplexed together and results in more efficient use of bandwidth. SDH systems use a technique called byte interleaving to multiplex several lower-speed channels into a single higher-speed channel. SDH defines levels such as 155.52 Mbps (STM-1), 622.08 Mbps (STM-4), and 2.5 Gbps (STM-16).

Differences between PDH and SDH:

One of the main differences between PDH and SDH is that PDH has a lower capacity and is less flexible than SDH. PDH is typically used for smaller networks with lower bandwidth requirements, while SDH is designed for larger networks with higher bandwidth requirements. However, PDH equipment is often less expensive and simpler than SDH equipment, which is an important consideration for some networks. PDH has a maximum capacity of 8 channels (E3), while SDH has a maximum capacity of 810 channels (STM-64).

Another key difference between PDH and SDH is that SDH is designed to be more resilient and fault-tolerant than PDH. SDH uses a technique called redundancy to protect against network failures, whereas PDH does not have this capability. Additionally, SDH provides more advanced network management and monitoring capabilities than PDH. PDH has no built-in mechanism for recovery from network failures, while SDH has a built-in mechanism called “path protection” that allows for recovery from network failures in a matter of milliseconds. 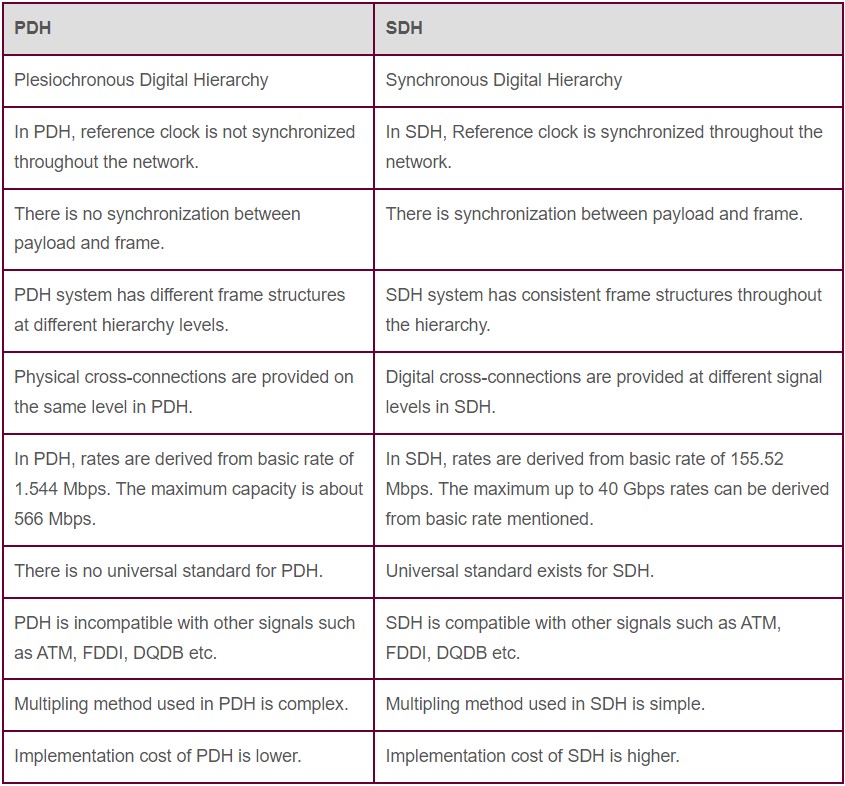 Similarities of PDH and SDH:

Despite their differences, PDH and SDH have some similarities as well. Both technologies use time-division multiplexing (TDM) to multiplex channels together, which allows them to share the same infrastructure. Additionally, both PDH and SDH are based on standard communication protocols and are widely supported by equipment vendors, making them easy to integrate into existing networks.

The choice between PDH or SDH should be based on specific requirements such as capacity, future scalability, resiliency, delay variance, topology and services. PDH is simpler and more economical technology that is suitable for small-scale network with low bandwidth requirements and low delay variance tolerance, whereas SDH is more advanced, flexible, resilient, and versatile.